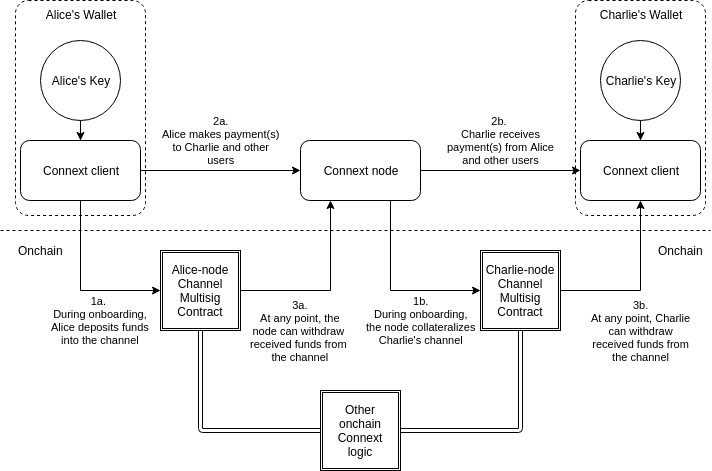 Indra is the core implementation monorepo for Connext. Indra contains ready-for-deployment code for core node services, client, the Dai Card (as a reference implementation), as well as scripts needed to deploy and operate a node in production. When deploying a node to production, the most recent docker images will be used.

For detailed instructions on how to run the code contained within the repository see the Running your own node guide.

There are several modules contained within the indra repository:

Clients with their own keys are ideally integrated directly at the wallet layer. This is because they contain validator code which determines, on behalf of the user, whether a given state is safe to sign. Clients can also be used via a connextProvider in a frontend environment to make calls to a hooked client that is hosted in a more trusted environment such as a wallet.

Further documentation on the client can be found here.

Nodes can be thought of as an automated implementation of the client along with services to enable client to client interactions. Nodes have the same functionality outlined above, and forward state update packets between clients.

Connext is built on Counterfactual’s contracts. Code is fully open source and a protocol description is available here.

Contains all the database migration information to be used by the docker images. Make sure that the migrations in the database module, and in the node/migrations folder are consistent if you are making changes here.

The Dai Card is a sample implementation of the client designed to help you bootstrap an application that integrates Connext. It contains an inpage wallet and payment interface, as well as a custom Web3 injection that automatically signs transactions using the inpage wallet. For developers just beginning to build their application, the card is a great way to get started; for developers looking to integrate with existing an existing app, it’s a good instructive resource for implementation and includes some components that you can easily copy over.