Routers are one of the two liquidity providers used in the Connext Network. The router’s role is essential; to provide instant liquidity for the user in the destination chain. Routers are given a fee based on the transaction size in return. Routers then claim the spent fund plus the fee from the AMB bridge after the latency period ends, which is around 30 minutes.

How do they work?​

The user initiates the transaction through a front end which is linked to the Connext Network smart contracts. At the technical level, these are the whole process:

Optimistic bridges differ from externally verified bridges. After the data have been posted to the destination chain, there will be a 60 minutes window for any watcher to prove the validity of the transaction. If any watcher can prove fraud on the origin chain, the original funds will be slashed and transferred to the disputed watcher instead.

Optimistic bridges use a single honest verifier assumption. This means that it requires only 1 of N verifiers in the system to verify and update cross-chain data correctly. In other words, the cost to attack an optimistic bridge with N verifiers equals the cost to corrupt or hack N verifiers. As a result, assuming the underlying chains are secure, no amount of money can guarantee that a hack or an attack will be successful.

Refer to security.md and router community call for best practices to mitigate these risks.

According to rekt.news, the top three of the leaderboard are all related to bridge exploit. All of the exploits would not have been possible if they had used an optimistic bridge, even if all of the keys were compromised.

The router’s primary business model is to provide liquidity in exchange for a trading fee. The trading fee is hard-coded at five basis points (0.05%) per transaction.

From the beginning of March to late April, the Connext Network made around $20,000,000 of volume per week; this gave the routers around $10,000 in trading fees. If in the future, as Connext’s userbase increases, the volume will also increase, which will benefit the routers directly. There is no impermanent loss for providing active LPs.

There are two types of liquidity providers in the Connext Network. Routers are called “active” liquidity providers, whereas Stableswaps AMMs are called “passive”. Routers or active LPs provide instant liquidity in the destination chain and then claim their funds back from the AMB bridge, as stated earlier. For active LPs, the users need to set up a router in order to provide liquidity and support the functioning of the network.

The reason for claiming the funds back from the AMB is because Connext Network uses an AMB as the settlement layer. The AMB locks assets on the sender chain (ex. DAI) and mints a representation of those assets on the destination chain (ambDAI). The process will work perfectly for chains that used AMB assets as their dominant token type, such as the Evmos chain (any IBC-connected chain in the future). When the user sends DAI and receives ambDAI in Evmos, they can instantly swap it on a DEX. 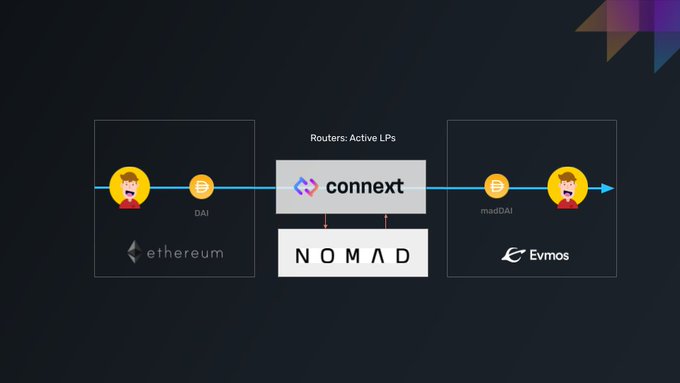 What if AMB Assets are not the adopted assets on that chain?

Polygon chain, for example, the dominant representation of assets, comes from the Polygon official bridge. The representation of ETH on Polygon is PoSETH (they called it normal “ETH”). If we gave ambDAI to the users on Polygon, they would not be able to use them immediately as those assets are not the adopted assets. Therefore, we need to swap AMB assets to the adopted assets on that chain. This is where passive LPing comes in.

Stableswaps AMMs (Automated Market Maker for assets that value tends to be pegged to each other) or passive LPs will be deployed on each chain. The Connext Network will automatically go through the AMM if they need to swap the assets type. The AMM will be a Curve-fork, and the LP providers will receive some fee based on the transaction size. Depending on the route, the flow might include 2 AMMs to convert the adopted asset types on one chain into madAssets and then reconverted back on the destination chain afterwards (mostly happens when bridging between EVM chains). 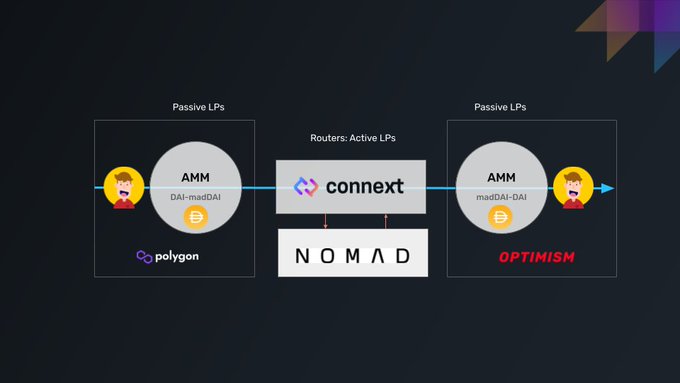 To conclude, there are two types of LPs after the Amarok upgrade: active and passive. For active LP, it is the router that provides instant liquidity. For passive LP, the Stableswap AMM converts between AMB Assets (AMB token type) and adopted assets when necessary.